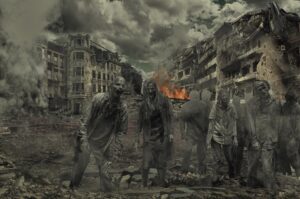 We sat completely silent in absolute darkness. The zombies, except the ‘boss’, reacted to sound. The ‘boss’ was more ‘evolved’. He strategised and led his flock. The mob stood outside the gate.

The kids were corralled inside. They were terrified but quiet.
The smell of rotten flesh, and the howls of the undead rent the night air, the ‘boss’ egging them onwards. We were minutes away from death or un-death.

He was right where we wanted him, under the tree and the boulder.

Bill cut the rope. The stone dropped right on the boss’s head, smashing it to a pulp.
Now leaderless, the mob grew silent. Then, hearing nothing more, they turned around and started shuffling away. A few more minutes and we would be safe.

It was then we all heard, in the silent night, Bill’s voice ringing out, loud and clear – “Whoopie! We did it!!!”